I spend a lot of mornings on trains in Salem. Since one post on this hellish Styx ride isn’t enough, I felt the need for another how-to when it comes to conducting yourself on a train. Also felt the need to seize the opportunity for such a punilicious headline. Before we begin, please note that there are several steps to take to ensure a safe and non-homicide-inducing journey.

Taking the train in Salem consists of 90% standing around, 10% train-taking. You will require the following:

As I had previously mentioned, there are only two doors on the train that opens – one  at a slightly higher ramp (which is meant to help disabled people, yet the carriage that stops there has STEPS), and one at pavement-level. This is why you see two distinct crowds of people. Best to choose pavement-level, and it’s your job to try to figure out at exactly which point on that pavement that one train door will open.

Boarding a train is like Salem’s version of football riots. It’s everyone for themselves, and whomever’s more forceful with their train-boarding will get on first. No-one will give a shit if you get edged out of the crowd and are in danger of falling onto the tracks. Move with the crowd, and figure out which side you’re going to get on. If you want to get in the first carriage, stand towards the right; if you want any chance of making it to the other carriages, choose the left lane. Like football hooligans, most of your fellow commuters are fairly thick and will choose the most-trafficked route. Stick with the first carriage – because everyone always assumes it’s full, they ignore it, leaving a third of it empty for the entire journey. Just remember to close around the door like vultures (leave no space) and make everyone who’s getting off the train in Salem feel woefully uncomfortable.

If this is your first time braving the throngs of commuter-related idiocy, here are some tips to relieve claustrophobia and try to disperse the crowd somewhat:

The train will inevitably arrive late. When the conductor gets off the train to announce its arrival, he will almost certainly advise everyone that “there’s another train behind us”, and (like today), completely fucking lie to our faces and say that “all the seats are taken”. Yes, there is a train behind that train. It’s probably in Rockport and won’t begin its route for another 40 minutes, but it IS behind that train. Do not bother engaging the conductor to voice your displeasure; there is always someone louder, ruder, angrier and more obnoxious than you. Remember, this is New England.

Because you are getting on in Salem, everyone who got on at Rockport has filled up most of the train. I take the express from Salem, and even though they know that means that Salem is the last stop before Boston, you really ought to see the incredulous looks of disgust and annoyance on their faces when faced with the idea of having to share the other half of their seat.

Worse still, are the two who take up either ends of a 3-seater. You’ll know how much of a dickhead the one on the end is by what they do when you deign to ask to sit down – they’ll either get up and force you to sit between them and the window-seated passenger, or they’ll shuffle to the middle without a fuss. Don’t feel uncomfortable about asking someone to shift their arse to make room. There’s a reason it’s called public transport.

If you are lucky enough to find a seat, you can sample the sartorial delights that make up for the lack of a food trolley cart, straight train tracks and comfortable seats:

Best.tights.ever. I want to be like her when I grow up.

It’s fairly certain that you will have to stand. If you do, don’t fucking bother going all the way to the end of the carriage. You can see from the entrance whether or not there’s any seats, so if you have to stand, stand near the front of the carriage. Remember, only one door opens to the outside, and it’s likely that you will have to traverse the entire length of the train to get to it (if you were stupid enough to avoid the first carriage).

Try to grab a spot by the pole, because every other standing aid is a thin strap of leather attached the top of every seat. This is a passenger hair-pulling accident waiting to happen, so to avoid lawsuits (remember, this is Massachusetts – there is a reason every legal drama/sitcom is set in Boston), stick with the pole (shut up). Be aware that there is virtually no room to manoeuvre, especially when taking your cash out to pay the conductor:

Freak out the sleepers

Since you can’t do your entire makeup routine or read a book without falling over, you are going to have to amuse yourself. Look around you – almost everyone who is sitting down is fast asleep, weary from getting out of bed 20 minutes before you did. They deserve their sleep, but it’s fun to see how long you can stare at one of the sleepers until they wake up and think you’ve been trying to steal their soul.

If that isn’t your bag, you will have to find something else to stare at. Good fucking luck, because everyone who is sitting down is staring at you. By standing up, you are on display. Everything you do is on a stage, and instead of checking their Crackberry or playing beginner’s chess on their meePad, they have chosen to direct their sneering gaze at you, exhibiting your lowly station as a standing, feckless loser.

If the turbulence on the train (yes, train) gets too much, it’s best to just go a bit limp and move with the swaying. This goes double for that odd journey that involves the train turning on its side and slanting its entire contents for a good ten minutes of track. Try to sway while holding the pole loosely. Yes, you’ll look like you’re a stripper doing Tai Chi, but at least you won’t fall over. Remember: everyone’s watching you.

Keep an ear out for the seated arseholes who bitch and moan when the train stops for a few seconds more than it usually does, or how it was a few minutes late, or anything concerning their horrendous toff-commute in general. Now would be a good time to refocus your playful gaze at the sleepers to a rampaging, murderous glare to those twats who are comfortably sitting and chatting (and likely near the front of the train).  Set your glare to maximum intensity if you hear them complaining about the fact that people are standing.

However, if you wear contact lenses, a severe glaring may not be feasible, or at least will be followed by a frenzied squint in at least one eye. You’d be better off using exaggerated body language to convey how much better they have it by being the Chosen Ones who got a seat. Rub your arm, feign pained grimaces, try to do that crunching thing when rotating your shoulder and continue to shift your bag as if it were the heaviest but most necessary burden. Try to prepare a speech about being one of the “untouchables” if engaged.

Finally, the misery is over, and all you have to do is get off the train so you can never see these bastards again (until tomorrow morning). This is where anthropological treats come in, even more markedly than when you boarded the train.  Before you even get within 10 minutes of North Station (i.e. halfway through the journey), huge spikes will begin to protrude through random seats, forcing some of your fellow commuters to stand up and claim their rightful place in line, even though they are nowhere near the door, and many, many other people will get off the train before they do (the same number of people that would get off if they were sat down).

Don’t let these new standees earn your respect. You were standing first – you earned an earlier place in line. The trick is to source out which people are likely to do this, and inadvertently block them from progressing to that one open door. Remember the crowd-dispersing exercise, and your skills with the pole (shut up) – use these to your advantage. You can even make a little dramatic – throw in some Gandalfing if it makes it fun:

The seat-yielder visual exercise from earlier will also come in handy to identify which twats are most likely to rise up. Whoever you saw getting up and forcing a passenger to sit in the middle is going to be the asshat who thinks that standing up will make the train move faster. Try to work with your fellow standing passengers to block his way, and see the look of indigance on his face turn to outright impatience. Ha! Now you know how it feels!

The worst offender, though, is the loud, obnoxious bint who complains in her horrible Rachael Ray voice the entire journey even though she had been sitting right next to the fucking door. She will gather her things and stand up right in your face to claim her rightful two inches of breathable space that was previously occupied with reasonable standing room between two humans. She doesn’t even need to move – all she has to do is twirl around and she is already in position. These people are pros. Just look at this bitch: 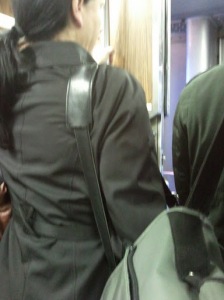 See that tiny brown speckle next to the left-hand side of her belt? That’s where this cow was sitting. Proper commuter etiquette suggests you let anyone sitting down get off the train before you, even if you were standing for the whole journey, but with inconsiderate, selfish twats like this, you may proceed to stand back-to-back and dispense the most obnoxious fart your tired little intestines can muster. Once you get off the train, you can passive-aggressively overtake them when sprinting down the arrivals platform. And then, after that childish victory,  it’s finally over.

And then you get to do it again 8 hours later.