What is it about the weather here that it has to present itself in two polarising extremes and has to be so unbelievably violent, regardless of the temperature, humidity or time of year?

In the summer, it can be blisteringly hot or humid to the point of suffocation. There’s a quote attributed (correctly, for once) to Mark Twain stating, “If you don’t like the weather in New England, just wait a few minutes”. Over here, it can be bitterly cold, swelteringly hot, pissing down with rain and heaving down with snow – sometimes in the same month.

November is one of those months. Having experienced highs of 0C AND 22C in the short span of a week, it’s enough to make flu season pack that more of a punch. New England bodies can’t reconcile the stark contrasts of weather with their wardrobes, so rather than wearing lots of light layers, it’s better to wear one or two great big fat layers so you can shed just the one if the weather steers towards the comfy side.

Currently, the big weather bitch is rain. In October, we had sunny sun AND a snowstorm, and last November snow was the big one to watch. After some flooding a few weeks back, it’s rain’s turn. The weather forecast said “Heavy Rain and Wind”, and The Weather Channel doesn’t tell lies: 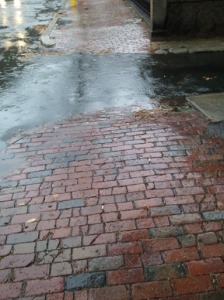 it's deeper than it looks...

It’s a common thing to have to cross several mini-moats to get to the train station. With the extra weight and wind resistance from your heavy wellies, you should probably add an extra ten minutes to any pedestrianised commute. Anywhere.

Except for the day before Thanksgiving, when the car parks all look like this:

This time yesterday, that car park was packed more than it’s ever been, so it wasn’t all commuters. People taking the day off work before and after Thanksgiving to give themselves a long weekend that we enjoy every month in the UK.

Not that the road was devoid of cars. You see, when it rains, there’s an unwritten rule that states that if you’re in a car, you MUST obey the speed limit up until the point of a large puddle, at which time you plow straight through it and violently submerge any passing pedestrian. Like me. After said pedestrian has issued the customary greeting (“oh, you f***ing c**t!!”) pretend to ignore them and drive off. If you don’t, your licence will be revoked and wolves will jacknife your tyres. This works best if you have an obnoxiously large, fugly truck. Like this bitch:

you know what they say about women in white vans...

As a pedestrian, you do need to be prepared for this weather. Do not think that your awesome yet clearly child-sized Doctor Who Cardiff Exhibition umbrella (which you did not realize was child-sized until today) will cut it with this weather. You need a good, strong, golf-style umbrella with a wind-proof lining, otherwise you will be spending most of your time out in the rain playing tug-of-war with the wind. And you’ll get soaked. Incidentally, my light-up umbrella has survived hurricanes, so it’s functional as well as completely effing awesome.

A waterproof jacket would be nice, but then so would waterproof trousers and a waterproof face. Don’t even bother this time of year; unless you can get one of those ones that looks like a sleeping bag with a furry hood, focus on warmth instead of dryness. If your bag isn’t waterproof, you’ll be focusing your keep-dry efforts towards a good umbrella investment anyway.

Wellies are key. Make sure they’re at least mid-calf high,  You will also need a bag to carry your “proper shoes” because whether you work in a freezing cold office or a high-trafficked clothes store, you are not going to be comfortable carrying out your job in those non-breathable, tall, thick, plastic clown shoes.

A hairbrush, either in your bag/pocket or at your work, is essential. This is not the wimpy English rain you might be used to. This is proper, roidy, rage-y, ice-hockey fan-rain. This rain doesn’t fuck around. You will look like you have been proverbially dragged through the proverbial hedge in the proverbial backwards fashion, so best make yourself look presentable. Side note: don’t even try to bother thinking about straightening/styling your hair. Bang it under a hat and just leave.

Prepare your umbrella-swishing-finishing moves: embarking the train/shuttle/bus is like a competition for the best seats. Whoever gets on first, gets the pick of what’s left. Don’t lose by being a wuss! Shake that umbrella off as fast as you can or sacrifice dry clothes for a non-shaken wet umbrella leaning against your knees so you can get that best seat. While waiting for/queueing to get on the train, if you have a wide enough umbrella, you can use it to flank standing-space-stealing hopefuls and block them from trying to get on before you.

Make sure your bag is organised. You do not want to be balancing that humungous umbrella on the inside of your elbow while you use both hands to fish around in your Mary Poppins’ carpet bag to find your work security pass, mobile phone or car/house keys and you angle your arm just the wrong way and…rain pouring off the brolly down your neck. If your bag doesn’t have many internal pockets, consider getting one of these.

Beware of leaves. Salem has a lot of cobblestoned and brick-tiled pavements. Fallen leaves turn to mulch, which is slippery enough. Add tons of rainwater and mud from other people’s shoes and you’ve got a recipe for disaster. This time of year, the streets are covered with huge piles of them, which will eventually turn to huge piles of slippery mulch. Watch out!

The aforementioned puddles can also be an unknown hazard, particularly where the pavement or grass is uneven/hilly anyway.. Even though this isn’t a specifically New England thing, remember, they are not always as shallow and harmless as they look: