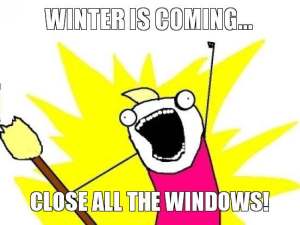 It’s getting colder, wetter, windier and colder. As I type, I can’t quite feel much sensation in my fingers, and I long for the days of my overheating laptop. To slog through these Dickensian conditions until my campaign for a state-wide paid hibernation is both put forward and taken seriously, I distracted myself by considering the following weather hazards this time of year.

Might sound obvious, but only good for rain. In New England, wind often accompanies rain, rendering the use of an umbrella completely um…useless. If it’s blustering out, what is the point in carrying an umbrella at all, besides giving your upper arms a good workout? It just becomes a weapon against yourself – you can try to clutch it with both hands and keep it still, or hold it close to your face to try to block the gales, but it will try to lure you into oncoming traffic every chance it gets.

You won’t be able to tell until you get outside, but gauging the strength of the rain versus the strength of the wind is your best way to tell if it’s worth wearing a hoodie (or this) instead of wrestling with that infernal bumbershoot. Otherwise, it’ll keep smacking into your face and the resulting concussion will have you hallucinating taunting choruses of “why are you hitting yourself? stop hitting yourself!” while you try not to look like an incompetent fool to anyone with a stronger brolly.

They are deeper than they look. Be wary of large cars, trucks, minivans, Escalades and basically, ANY American car, the drivers of which all feel it’s their duty to suddenly speed up and plow straight into that rank water, splashing you to the bone. If it’s raining, has rained, or is threatening to rain, avoid the edges of pavements at all costs, don’t wear white or anything that needs to be dry-cleaned, and walk as far inside the pavement as you can. Scale-walk against the wall of a building 1980s cop-style, if you have to.

As Salem is quite flat, it’s prone to flooding, so the slightest dribble of rain transforms most grassy areas like the Commons into a giant moat. So, if you live here in town, you can head over to the Fool’s Mansion, pick up some Renaissance-themed clothing and act out your favourite medieval legend. Given that I’m in a country that likes to call football soccer, I’ll no doubt be adapting my beloved Robin Hood into the lesser-known version, where the commie bastard finally gets his comeuppance. 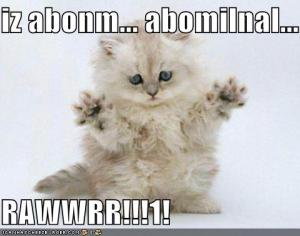 It might look pretty, but it turns to ice very fast, and becomes hell to walk on, drive in, fly through, or ride the trains in. Much like black ice on the roads, you won’t see the sneaky little bugger that slips you up on the pavement, either. Walk in fresh snow and don’t cross anywhere that doesn’t have a timed pedestrian crossing. Motorists are more important than you, and will become impatient if they have to wait at a regular crosswalk; this will encourage you will hurry to cross and you’ll slip and fall. Don’t. Make them wait while you take your sweet time crossing and can only blame the 20-second crosswalk crossing time for your long crosswalk crossing time.

Here’s how to dress: Scarf layered over your normal clothes, then winter hat, then second scarf wrapped around neck and anchoring hat inside. One pair of gloves, then a pair of thick handwarmers to cover. Two pairs of tights and a pair of slipper socks, then knee-length boots, OR a pair of tights under a pair of trousers. Yes, you are going to have to dress the way homeless people do in the movies, or like Joey in that episode of Friends:

Don’t even think you will ever get away with wearing one layer of anything from November to May. To avoid looking like a homeless person, use pieces with clean lines, key fabrics, and refrain from pissing yourself to entertain passing strangers for a dollar for crack money.

The first time I ever experienced hail, I was a tiny little child in primary school and I cried. I understood what it was (it is England, after all), but a lot of the other kids were freaking out and saying that it hurt, so the peer pressure got to me and I wanted to fit in. Also: it did hurt. It interrupted a Madonna sing-a-long I had instigated and I was finally starting to fit in. It was one of those schools that switched up the entire class population every year, so you could never really forge lasting friendships, so the Madonna sing-a-long was a key moment in my friend-yoinking skills. And then that fucking hail came and decided to…hail on my parade. Horrible, icy little bastards. Mother Nature’s best weapon against mankind, hail is the non-sissy version of snow, and no amount of church bell-ringing and canon-firing is going to stop her from pelting you with ice like a bitter, misunderstood frat boy.

That mutant freak between rain and snow, its whimsical approach to the six states of matter means that you truly have no idea what to expect – ice, snow, or nothing at all. The Weather Channel calls it a “Wintry Mix”, so they can fuck off for making it sound like a Christmas selection box. It is not like box of chocolates. Although…you do never know what you’re gonna git. 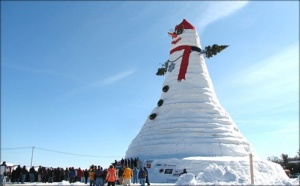 Despite all potential hazards of the above, Massachusetts is not a state of wusses. While in England, schools have been closed due to extreme winds and the lightest flakes of snow shut down entire stretches of motorway, you will still be expected to come into work unless your house is completely submerged in whatever weather is threatening you. According to one of the (sane) shuttle drivers, the last major MBTA disruption was in 1978, during a massive snowstorm. And when they mean massive snowstorm, they weren’t just showing off, because it murdered 100 people and caused over $50 million in damage. So even if you have to ski to work, you are still going to have to make it in, because everyone else paid good money for their snow tyres and they aren’t going to let them go to waste when there’s plenty of puny pedestrians they can drown in tyre-induced snowdrifts.