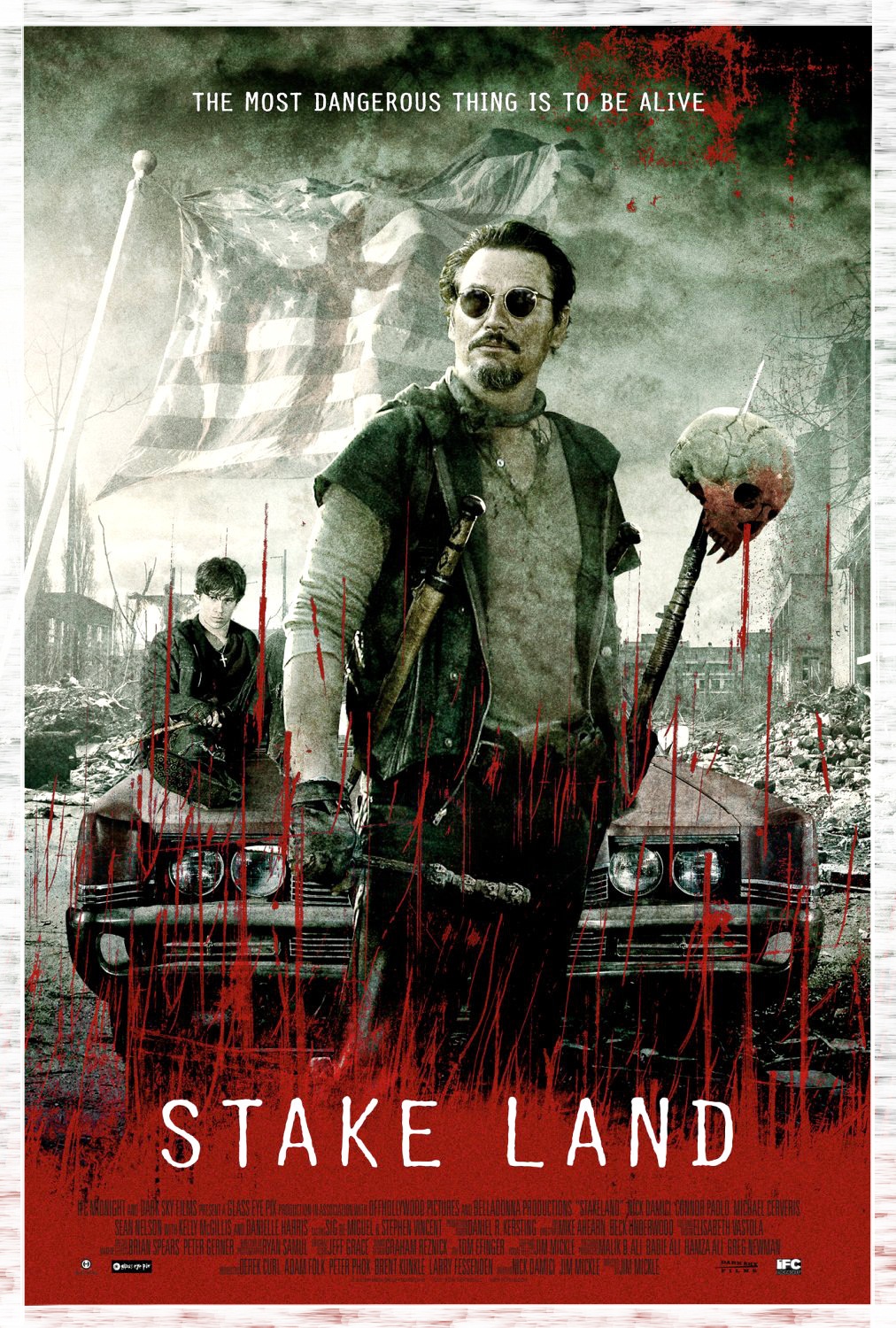 The second day of my month-long horror movie challenge brought me to give the very, very, (very, apparently) small indie horror flick Stake Land a go.  The premise seems awesome – it’s a post-apocalyptic wasteland, but instead of the zombies of the similarly-titled (and similarly-charactered) Zombieland, this film’s mindless series of antagonists are vampires. In this world, the vampires have won – no longer glittering, seductive succubi in the night, they are instead the growling, destructive, messy plague that have actually helped to wipe out mankind.

The vampires themselves are kind of zombie-looking (and with terrible makeup), and it’s heavily implied, due to the value of zombie teeth, that these bloodsucking bastards are hard to kill. There’s a spattering of dialogue throughout the film that refers to different classes/weaknesses of vampires, each of which must be killed in a specified way.

I really thought I was going to hate this one. I’m still kind of “meh” about it, but an enthusiastic sort of “meh”. I appreciate that it’s a fresh take on the vamp genre, and that we’re being presented a world in which the bad guys effectively (and in varying guises) have already won, but the film’s plodding, episodic pace make it feel better suited to a TV pilot than a feature-length film (which, oddly enough, was the intention of Zombieland’s filmmakers).

Also disappointing is the complete lack of character development, which is problematic when every chapter of the film throws a new character at us. More dialogue or more character monologues or just something to explain some of the bafflingly poor decisions that these characters make (why, for example, leave a safe place to go on the road with two strangers if you’re heavily pregnant?). Instead, the film relies on a throaty voiceover from the film’s teen protagonist to stitch things together, only the voiceover is all tell and no show – it recounts clear, simple events as we’re seeing them instead of illustrating something unknown or not obvious to the viewer.

Despite the film’s (apparently) $4 million budget, forgive the moments that could have benefited from better CGI (a car chase, for example). Most of the action is shot in shanty towns and woodland sets; costumes and weapons are simple, as are camera shots (at times it’s almost as if the camera never moves, except to do an extreme close-up of someone’s face). Good acting from the leads (including Kelly McGillis’ tortured nun) keeps from the film from straying into “good-but-solid B-movie” territory.

The movie is unrelentingly grim, but sadly very appropriate, given the post-civilization craphole the characters are wandering. There is almost zero humour in this film, and the first scene features violent imagery the likes of which I’ve never seen in a movie (and, quite frankly, never want to see again). I won’t say too much, but that kind of violence is typically off-limits to even imply in a movie, let alone actually show it. If you can get past that, the rest of the movie is worth sticking around for, even though it may aimlessly meander from place to place without much of a clear purpose (much like its characters),