I’m now wishing I’d added more classic horror to the list. Even beyond horror, that era has a style of filmmaking so far removed from the ones I grew up with and enjoyed today. Everything is so dramatic – the shuddering violins, the shrill crescendoes, the hair-raising lady screams (I swear, people screamed MUCH differently in movies back then), the slow zooms – even the way the opening credits are hurled at you can give you the old-fashioned creeps.

So I knew I didn’t underestimate The Skull, a pre-Saw, pre-Sinister etc. movie that had the legendary likes of Peter Cushing AND AND AND CHRISTOPHER FUCKING LEE. The former plays Pierre, a collector of occult artefacts who happens across a skull (the very same one that caused the hair-raising scream in the prologue). But it’s not just any skull – it’s that of the Marquis de Sade, famous French writer of all things sordid. The film adds a (somewhat true) backstory in which the Marquis was heavily engaged in Satanic sadism and all things unsavoury. So naturally, Cushing’s character just has to have it. Even though it was originally stolen from Sir Matthew Philips (Lee – sadly, in a supporting role). Funny thing is, Philips doesn’t want it anymore. Yay for everyone involved! Probably.

To be honest, one could just sit and listen to Cushing and Lee say things to each other and think it was impressive. They both exude creepy class. When the two gents calmly discuss the skull over a dimly-lit game of snooker, surrounded by black candlesticks and story-stuffed artefacts, there’s already a sophisticated yet ghoulishly claustrophobic atmosphere built up. 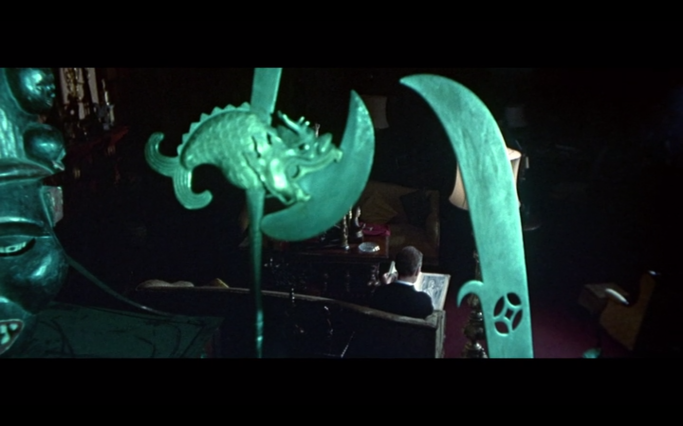 And then it gets a bit weird from here. And when I mean weird, I mean surreal – no, actually, totally fucking bonkers. Crescendoes and zoomy-zooms and Dali-esque imagery start to dominate the film to the point where not much dialogue seems to be needed. It’s a little slow-paced, but it’s such a short movie that you’re not really going to notice much of a lag.

This movie utterly relishes the opportunity to throw close-ups of a plethora of weird and wonderful props at every turn (after all, both main characters are collectors of all things spooky). Had it not been for the whistling wind and billowing curtains, I’d have thought it was a paranormal home shopping network telecommercial. It’s like Hoaders: Most Haunted edition. Except with a shitload of honestly-quite-frightening masks, swords, and other “nope” things that, if you were to accept from a a Mogwai store, it’d be the start of your own horror movie. (I still wanted to buy it all.) Pair this with the upper-class backgrounds of each character, and you’ve got ample chances for some suitably eerie imagery of gargoyles, taxidermied crows, imposing antler furniture, dusty mantlepieces, crackling fireplaces and ghastly wallpaper in a ghostly stately home. I mean – characters are literally walking around a lofty, cobwebbed mansion holding a skull, through which there are a number of surprisingly ominous POV shots.

Quite fascinating are the true notes of the story – the actual skull of the Marquis de Sade was removed shortly after he died. The body had been exhumed and the skull taken for phrenological examination (a cheeky reference to this is the phrenologist thief who is the skull’s first victim in the prologue). It went through a series of owners, but was then lost. The skull was never found.

It doesn’t get any deliciously creepier than that.