Either we are alone in the Universe or we are not.

Both are equally terrifying.”

And so our movie opens with a rather chilling quote from Arthur C. Clarke. In comes the dramatic irony with a pleasant family barbecue hosted by Lacy (Keri Russell) and Daniel (Josh Hamilton) Bennett. Everything seems rosy, but the adults are distracted by their strained relationships, money woes and piling bills. They’re too busy to be honest or intimate with each other, and definitely too busy to watch their young boys, who are either reading scary stories in the dark or watching the tamest, lamest porn ever with neighbour kids in the dark. It’s a nice house though. Big. Spacious enough for an unknown entity to poltergeist its way around, destroy every item in the fridge (“what kind of animal eats all the lettuce but leaves all the bacon?”) and spook the dog. Daniel chalks it up to a stray animal (“a giant rabbit with opposable thumbs”), but when Lacy wakes up in the middle of the night to find a surreal tin can sculpture in the kitchen, she’s not so convinced. And after every family photo is replaced with a sheet of white paper in the frame, and when their youngest son starts to have random terror episodes, the already-fractured family dynamics begin to fall apart. After hundreds of birds inexplicably slam against every window in their house, Lacy suffers a near stroke-like episode. She then uses her enforced downtime from work to…Google the occurrences. Well, that’s probably what most people would have done, and we get to see her deteriorating state of mind when we see her click on a link that literally says “conspiracy theories”. So on the surface of things, it comes across as a very tense drama about the pitfalls of middle-class pride and a broken family struggling through a very, very contemporary financial setback. And as petty as some of the arguments Lacy and Daniel have (a massive blowout when she discovers he lied about how well an interview went – that’s really it), their story is relatable. But it’s not enough to hold one’s attention during what should be a tense horror movie. Netflix UK’s synopsis states the movie is about a family who discover that aliens have been abducting young children and that one of theirs might be next. This plot point isn’t even revealed until almost the final act!

The interminably slow build-up relies on a series of “are you fucking kidding me with this tropes”: disturbing children’s drawings, mass bird suicide omen, circumstantial, real-world hindrances (the boys develop some truly horrific marks on their body that prompt neighbours to think that the Barretts are abusing them). Jump scares are a thing of the past, but this movie uses them as if they’re the next big thing. Much of this works well as an insidiously-paced psychological horror, but the filmmakers just can’t restrain themselves when they reveal said aliens and destroy the ambiguity (are they really abusing their kids?) that was the sole cause of any tension the movie had going for it. While the film does draw you in by painting a portrait of an estranged family in danger of becoming dysfunctional (especially with a disaffected pubert [yes, I am making this a word]), if we’re going to stay with this family, I would have preferred to see them make more realistic choices, even if each of their mental states are questionable. Given the official synopsis, I think it would have worked better to see a variety of families experiencing the same situation, rather than the singular journey of some self-absorbed, privileged couple who waste over half the movie not quite understanding what they’re facing. It could even have been a TV series, allowing the supernatural/sci-fi events to unfold while learning each family’s story. 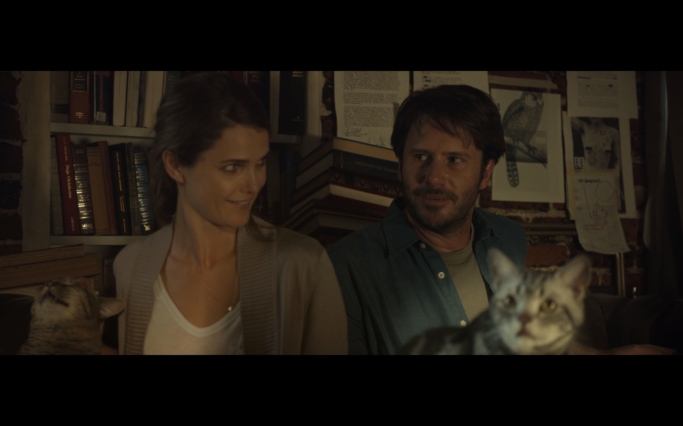 excuse me dark skies wtf is your problem with cats

The movie starts out around typical, strained relationships but then the lazy formula starts to creep in with the arrival of The Donor, a character type that Provides Information so that the rest of the movie has more structure now than the slow-burning Strange Things Are Happening of the first two acts. It’s an insulting bit of cop-out, as we’re told that there’s no reason why the aliens do what they do. So they just seem to torment everybody by causing strokes and meddling with Social Services just to troll their test subjects? What lazy writing. There is a rather sweet scene in which the family realise they must physically and mentally stick together to overcome, and they sit down to watch the 4th of July fireworks on the TV while having dinner. It’s the only time we see them together as a family.

But by the end, it’s Stupid Decisions A-Plenty, and a third act that feels nicked from an episode of The X-Files is hastily tacked on. At this point, I don’t know what sort of movie this is trying to be, and the maudlin imagery and dreamworld fake-outs aren’t going to provide an appropriate distraction from it. It was honestly all so…boring. Isn’t that the worst thing a horror movie can be?