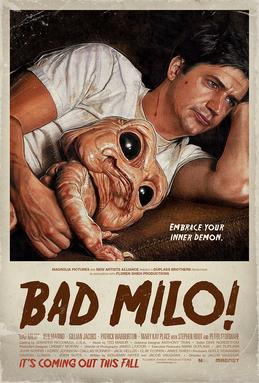 Bad Milo! has been on my Netflix list for a while, and I feel a little cheated that it wasn’t as awesome as it could have been. It’s a gross-out horror B-movie with feels, which seems awesome on paper. Mild-mannered accountant Duncan (Ken Marino) is getting stress from all sides: his shitty, high-pressure boss (Patrick ‘The Voice is the Life’ Warburton), his flaky mother (Mary Kay Place), his even flakier dad (Stephen Root), and his gently-nagging-but-still-loving wife (Gillian Jacobs). Owing to said mild-manneredness, he does the fine thing that we Brits do and keeps it all tightly bottled up.

It’s all a bit like holding in a fart, or not quite pooping when you should do, or gluing down the lid on a pressure cooker – it’s a ticking time bomb and Duncan’s stress literally manifests itself, taking the form of a demon resembling the feculent bastard child of Mac from Mac and Me and the baby from Dinosaurs.

One look at its elongated, overlapped sets of teeth and you can guess what’s going to do, and how it’s going to do it, and every night it literally crawls out of Duncan’s tight end to dispatch the very sources of his stress.

There’s not so much gore as there as fantastical, theatrically-spread blood splatter zones (wait; I’m remembering the alley scene – yep, there’s gore. Hee!). Once Duncan realises what’s up, he immediately seeks help. Not to a demon hunter, an exorcist or even just one of those movie dudes who sit in dusty home libraries with a half-dozen tomes about said demon. Instead, he consults a therapist (Peter Stormare), who advises him to make friends with the colonic creature to dissuade it from giving Dexter Morgan any more  hard-ons.

Unsurprisingly, this doesn’t really work. I’d imagine it’s like someone trying to speak softly to their IBS pangs as if they were labour contractions, or giving a powerpoint presentation to your cat about not pissing all over your new live-in girlfriend’s possessions.

But that doesn’t stop us from getting a series of almost-tedious therapist-patient existential ramblings (possibly improvised?). One of these would have got the goofy tone across, but from number two and onwards, they ended up being scene fillers at the expense of even a little bit of character build-up. But we at least get a lovely sock puppet moment.

It all culminates in a bit of villager pitchfork-branding and awkwardly-choreographed crowd scenes, and by the end I was wishing that the past 80 minutes had had a bit more of the poop demon and less of the aimless tete-a-tetes and associated screaming matches. It’s not quite as farcically foul as Zombie Ass: Toilet of the Dead, but at least the demon has cute, Puss-in-Boots eyes, and we’re mostly – mostly – spared the sheen of poop you’d expect something tunnelling out of your anus to have. It’s like a murderous, intestinal ewok. You’ll end up wanting one for Christmas.