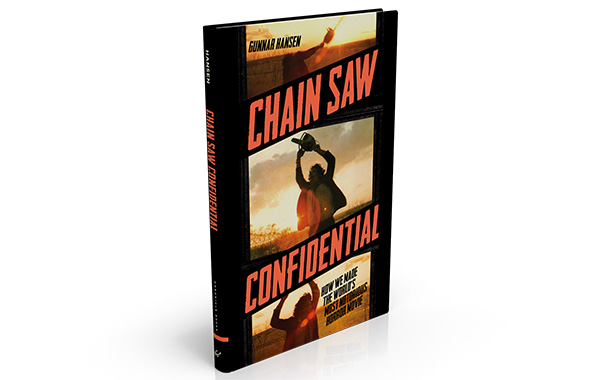 Today, I finished reading Chain Saw Confidential, a wildly entertaining, funny and sometimes shocking memoir of filming The Texas Chain Saw Massacre. I’d been dipping into it on and off for a few months; when I made the time to read anything other than comics and Reddit, it was the only other thing I was picking up.

Written by the sadly recently late Gunnar Hansen (the original Leatherface), it’s a heavily detailed, insanely true account of ‘how [they] made the world’s most notorious horror movie”, right from set design, casting and filming, through to financing and distribution. Hansen’s book was needed not just because it was the ultimate insider piece, but because, as he states in the book, much of the cast and crew were too dead to refute the number of false stories and and myths surrounding the film’s production.

Hansen was a giant 6ft 5in, Icelandic-born recent college graduate whose creative output lay mainly in poetry. This gentle guy was a total n00b to acting – and to operating a chainsaw. Add to the fact that the budget was zero and the filming days were long and hot (gotta love that Texas summer), and you get the idea that the shoot was a nightmare in itself.

The book is full of some disturbingly funny truths: real skeletons were used because they were cheaper to source from overseas medical schools; animal carcasses were used as set decoration, even when the midsummer Southern heat openly fried them; amateur actors in stage combat looked amateur, so everybody consented to being actually beaten; marijuana found growing on the ranch where they were filming was hastily cut away (to avoid felony charges) and made its way into pot brownies, which were the cast and crew’s only food source at times. Also: that chainsaw was real, even when everybody was high. There’s more, including some rare on-set photos and pictures of some unique Chain Saw merch – including  a video game!

It helps the narrative that Hansen was a writer – and later a professor of creative writing – although he does get repetitive at times. His memory is incredible, and the sheer amount of research and interviews he must have done to set the record straight proves his love of the film far beyond his consistent horror-con appearances. Such a compelling, fascinating, insightful read, and such a loss to the horror world.