Against my better judgement, I elected to eat a particularly goopy pad thai while watching a movie that had people fainting and puking in the aisles last year.

Bite is actually your standard foray into body horror, a subgenre I’ve seen done to more gruesome effect in Starry Eyes and even the messy agency-eraser Contracted. Disregard the movie’s first 10 minutes – a bafflingly out-of-place, cringey torturous found-footage sequence of ‘girls on holiday’ – thankfully, the film cuts to not only a post-partying narrative, but also a normal style of photography.

Both of which work better for the story. Casey (Elma Begovic) is recovering from her hen weekend in Costa Rica: a mix of too much booze, a series of regrettable encounters with party dudes, and an increasingly gross bug bite. 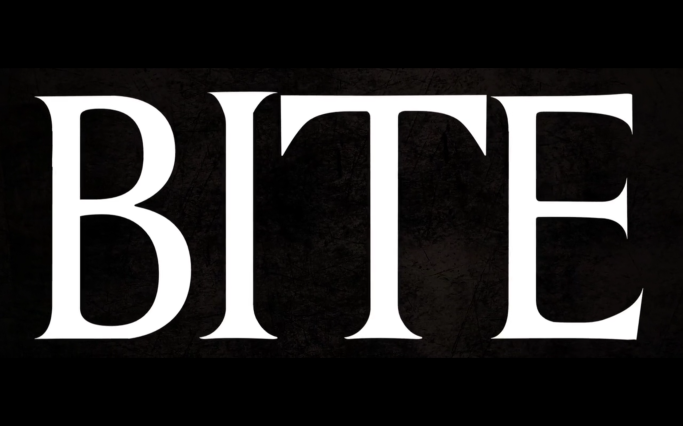 I will say that this title screen, plus its fucking deafening accompanying crescendo, unsettled me somewhat. But it’s probably the only scary part of the Chad Archibald‘s directorial debut. The rest is just slow and a little bit gross.

There’s an attempt to mix in some human drama: our main character has cold feet about her wedding, helped in no part by her absolute cuntclot of a mother-in-law – who happens to be her landlady, and has forbidden her to have any sexy times with her son (who lives across the hall) before the wedding. Meanwhile, one of Casey’s two holidaying friends has been doing a shit job of her jealousy of Casey and her coveting of her fiancé, and doesn’t seem to care much that Casey’s been holed up in her apartment for over a week. A soap opera in itself, but its superficial execution deems it superfluous to everything else on screen. None of these characters are sympathetic; they only have references to potentially interesting backstories.

So once the squeamish transformation hits, there was no true horror there. Instead, you can marvel at a decently-done pustuled bite, the constant stream of light orange mucus oozing out of Begovic’s mouth, and how long it might have taken the production crew to fill an apartment-sized set with tens of thousands of gelatinous growths cascading over every piece of furniture like an slimy waterfall.

It’s genuinely neither that disgusting nor tense, but as with all things body horror, it’s interesting to see where in the transformation the story will take you, and whether or not we see any kind of fallout. With Bite we do get both, but the movie might as well have ditched the time spent on the ridiculously unconvincing interpersonal relationships. Every moment of suspense and gore is telegraphed – after Casey’s first encounter with a familiar face, it’s boringly obvious what’s going to happen when in comes Person Number Two, Person Number Three and so forth, these scenes only existing to showcase the webbed, jellied apartment and the icky bloodshed that follows.

It’s a shame that both the poster and the wiki synopsis pretty much spoil the ending, but if you’re in it for thrills or surprises, you’d best look elsewhere.