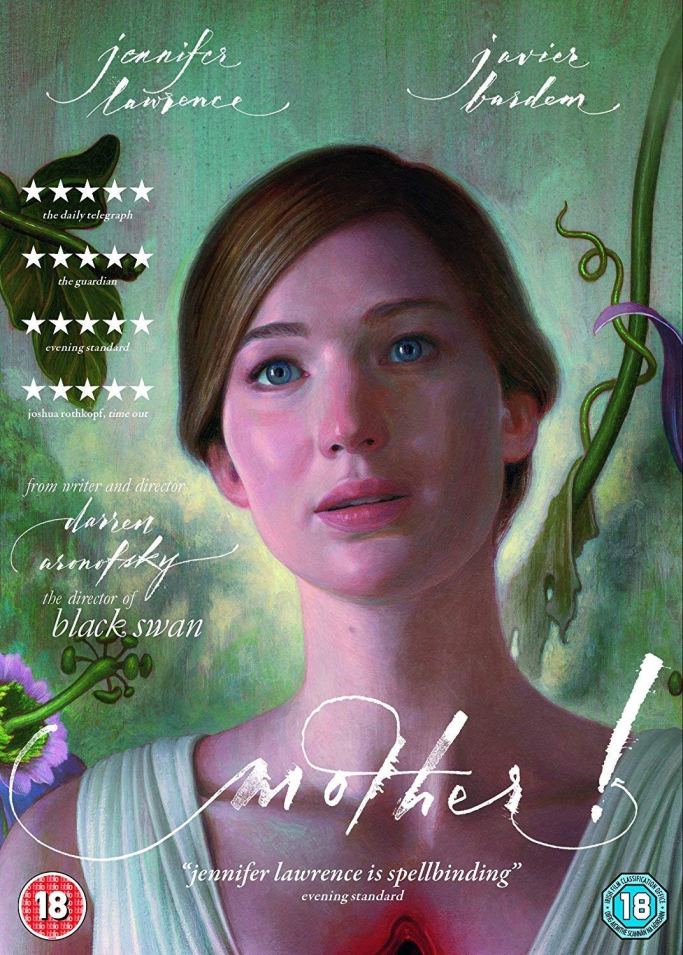 As an agoraphobic with claustrophobia, OCD, anxiety and a fear of being ignored more than I already am, fuck this movie.

I don’t like people I don’t know coming into my area and messing with things I have painstakingly half-put together, so the entire movie could have been Jennifer Lawrence telling strangers to stop sitting on her sink because it’s not fucking braced yet and I would have readily eaten up the tension.

But there’s more to Darren Arronofsky‘smother! than catering to my very specific phobias. It’s a simple tale: a young wife finds her idyll with her older, poet husband (Javier Bardem) disrupted when a stranger-cum-houseguest (Ed Harris) arrives. She has single-handedly rebuilt her husband’s huge home from its former ashes, and is still applying some final touches when things start to snowball into something sinister and chaotic.

Post-work, my dad showed up for the last third of the movie, where everything starts to go beyond your average plot swerve. I didn’t really know how to explain it to him. Especially THAT scene. My only prior knowledge of this film was of its notoriety in dividing audiences into love/hate camps, rather than moments that push the envelope past the point of cinematic decency.

On the sum of its parts, I can’t quite seem to dislike it – I thought it built up some absurd, darkly comedic yet uncomfortable atmosphere with the house’s unwanted guests, the camera intrusively shoved in Lawrence’s face for almost every shot of the film [though it’s hard to shake off the unsavoury taste of Arronofsky taking up with his new, much younger muse Lawrence during filming. Was the cinematography some biased-ass flirting?]

I have to agree with a Reddit comment that cocaine probably deserves a co-writing credit, though the whole film is a rather blatant allegory of the Bible and God (Bardem)’s relationship with Mother Earth (Lawnrence), with thuddingly obvious motifs. Two sons fighting to the death over family matters; a forbidden fruit; Lawrence’s character literally painting and dressing in every shade of beige until other houseguests literally bring in colour in clothing, gifts, etc. Performances take a backseat to the events of the final act, but it’s hard not to wonder if Lawrence is miscast as a baby-voiced house damsel.

Its tone and plot fuckery likely won’t make for palatable viewing for some – Gaspar Noe did it better with this year’s Climax – but if you ignore the trailer and stick with it, it’s a rewarding and haunting descent into a satirical nightmare.