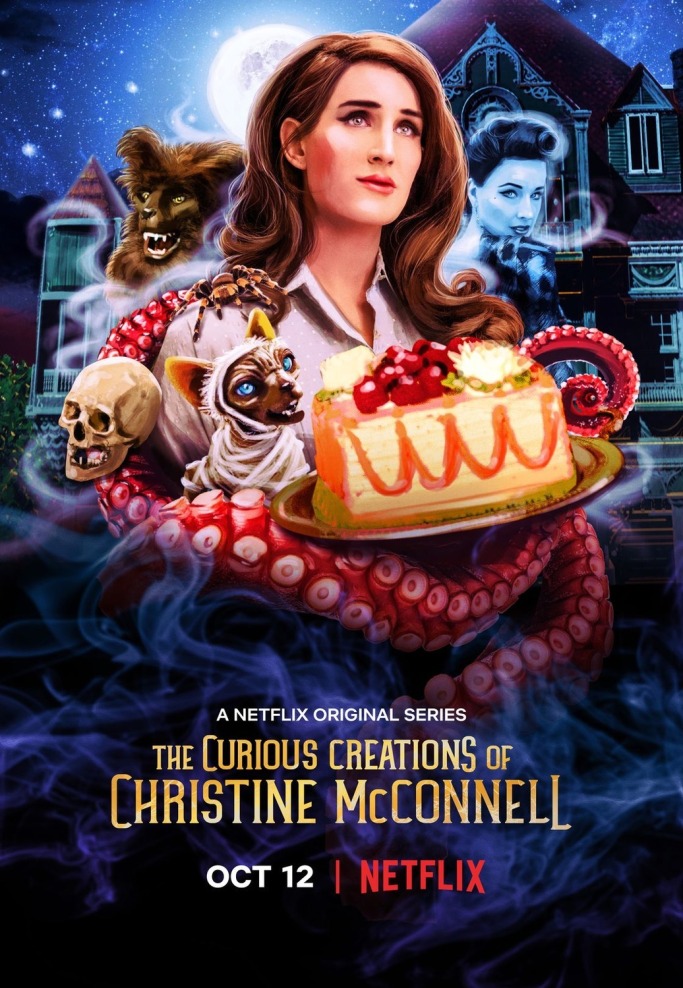 I’ve been following Christine McConnell’s amazing cakes for a while – first on Reddit, then Instagram; anyone who hasn’t seen her spectacular Alien cake is missing. OUT.

Netflix hit gold with her, because she is already so fun to watch on her own, with her old-vintage TV persona and her ’50s clothing and make-up. But, combined with the presence of a talking, mummified cat and a lifeforce-leaking skunk (courtesy of Brian Henson), it’s the Martha Stewart-Addams-Munster mashup I never knew I couldn’t live without.

Friends have told me there’s plenty more oddities after episode 1, so it’s unlikely that this is for kids – although that’s probably already made clear by the line,  ‘I still think murder is a better surprise’. McConnell seems somewhat uncomfortable delivering scripted lines at the beginning of the pilot, but softens once she looks like she’s getting used to first-time acting (and against a cast populated entirely of muppets).

The creations themselves range from the relatively simple (candied bones) to the breathtakingly elaborate (a cake house complete with watery, glaring eyeballs and fangs), showing the sheer range of McConnell’s talent. But the devil’s in the details: small tweaks to make her creations more realistic, and isolating some elements of the larger pieces for some how-tos so that you really could try to follow along at home.

Each episode has a small plot line, but there’s also an overarching storyline at play. It’s a fun, spoopy change from all the other baking shows out there, to which I say: more, please!