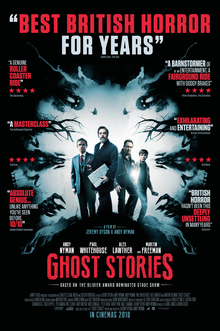 I have mixed feelings about Ghost Stories. On the whole, it’s a genuine throwback to the creeptastic anthology fun of horror days of yore. But if you’re a nitpicker who just has to (accidentally) find some reason to almost dislike a film, then it’s a package of tales that wouldn’t look out of place in a 2 am TV also-ran slot.

Ghost Stories’s plot is thus: a hungry investigative writer (Andy Nyman), whose trade is exposing supernatural scams, is tasked with his aging, ailing idol to investigate three of his unsolvable case files. This sets us up for some sweet episodic pacing.

Not that we need it. Each tale boasts three fantastic performances from the likes of Paul Whitehouse (damn, can he play serious), Alex Lawther (still on fire from his excellent turns in Black Mirror and The End of the F***ing World), and the ever-reliable Martin Freeman. Writer-director Nyman is capable in his performance, but it’s smarter when he sits back and lets his cast get to work, as their stories are told through flashback rather than interview. So far, so great.

Its problem was its third act: in trying to be too clever, it tripped up over the common trope of ‘it is then revealed that ___ ‘ that you’d see in the penultimate paragraph of a Wikipedia plot summary. It upsets the engagingly offbeat tone of the trio of tales that had come before it, and even the prologue. In fact, the more I think about it as I type, the more it feels like every act of this film was written and directed by different people (even though it is Andy Nyman all the way).

At 98 minutes, it felt criminally short, and the thread that linked the three stories together never really manifested before the third-act shift and unsatisfying ending. A pity, but enjoyable on balance.