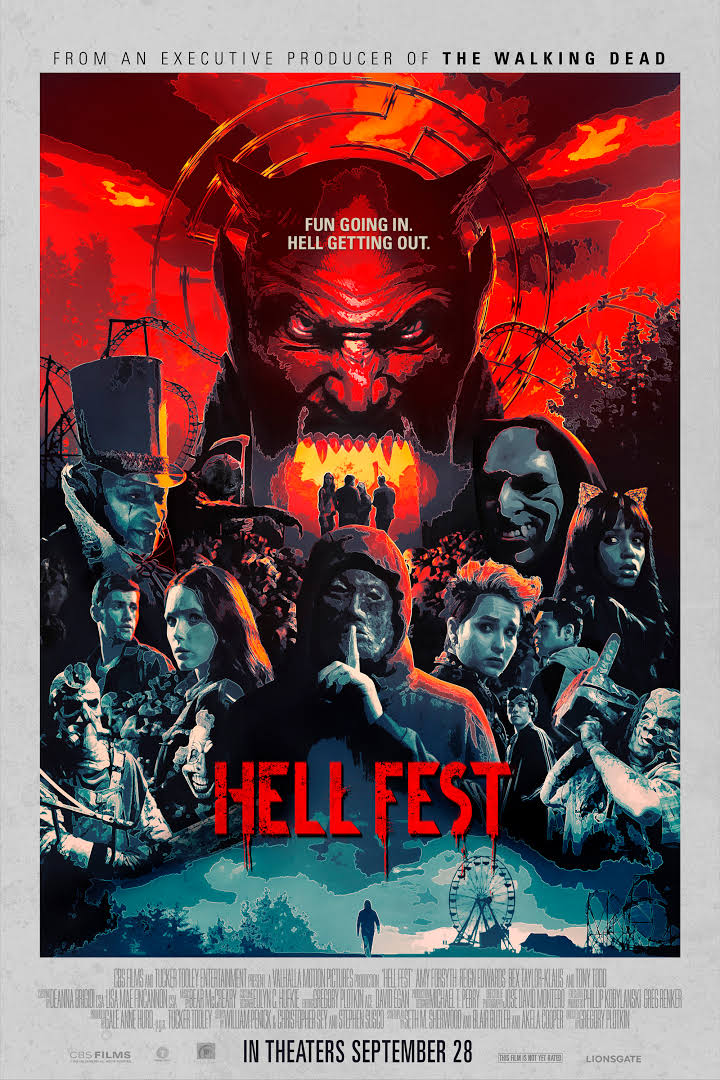 Disclaimer: I live/lived (it’s complicated) in a town that celebrated Hallowe’en like no other. And I’ve always been a sucker for all things spooky. So it’s not a surprise that I had a soft spot for Hell Fest, which got a score of 43% on Rotten Tomatoes. Here’s why:

I didn’t mind the threadbare plot of a sextet of friends meandering about a Hallowe’en theme park (think Hyde Park’s Winter Wonderland, but with haunted houses). I found their chemistry fun and believable, and the ribbing (some of which seemed ad-libbed) was sweet enough to make me miss my own spoopy friends. The thinly portrayed characters didn’t bother me, and neither did the occasional lapse into horror clichés. I was all on board for a virtual trip around a loud, bustling horror theme park, and let me tell you that the sets for these are fantastic.

Seriously, who designed these rooms? The production design, the props, the colours – it all pops with the abject spirit of the spooky season. I’d sign up to a live feed of that creepy mannequin room alone. The camera work often shifts to a first-person view so we can see some of their hard work for ourselves. Much of the film’s action takes place in these rooms/mazes, and it’s a blast to watch the characters play through the rooms switching from being happily scared to genuinely terrified.

Design aside, I found the set pieces surprisingly well-written, smartly dodging an audience expectation here and there. This movie knows its tone and throws some playful nods to the campy dialogue and stalker kills of mid-90s slashers (some more overt than others – no spoilers).

It’s not as memorable as it could be, though, which is the downside of relying too much on genre tropes – the characters don’t leave much of an impression and the actual gore is underwhelming. And it’s disappointing that such a frighteningly plausible premise isn’t leveraged to create some truly nail-biting tension. But this is still a fun choice for an October 31st movie party, as maybe an opening act for something like Trick r Treat.