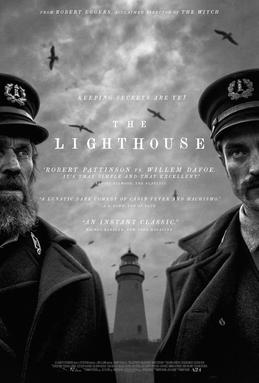 Ever wondered what it feels like to be trapped on a New England [woo!] rock with an increasingly strange boss who treats you like crap while a nor’easter storm brews ominously in the foreground? Then enter The Lighthouse.

Weirder than even The VVitch, Dave Eggers‘s sophomore offering is another entry in the modern-horror-fable subgenre, and a fine evocation of insidious sea shanties of yore.

Like Eggers’s aforementioned debut, we’re treated to a sparse cast – of just two – archaic language and the unforgiving environment of nature at its bleakest.

Willem Dafoe and Robert Pattinson play Thomas Wake and Ephraim Winslow, a pair of lighthouse-keepers on opposite wavelengths. The former bosses the latter around without remorse, while encouraging him to up his alcohol intake, which gives them the illusion of gradual bonding, but the older forbids the younger to enter the lighthouse itself, as he feels spiritually wedded to it. Unfortunately, as is still the case in Massachusetts, it’s pretty easy to get fired for no reason, so young Winslow has no choice but to soldier on with his increasingly unpleasant duties while trying to flatten his growing resentment for his elder. But sanity is slipping amid the first warnings of a literal and figurative storm. 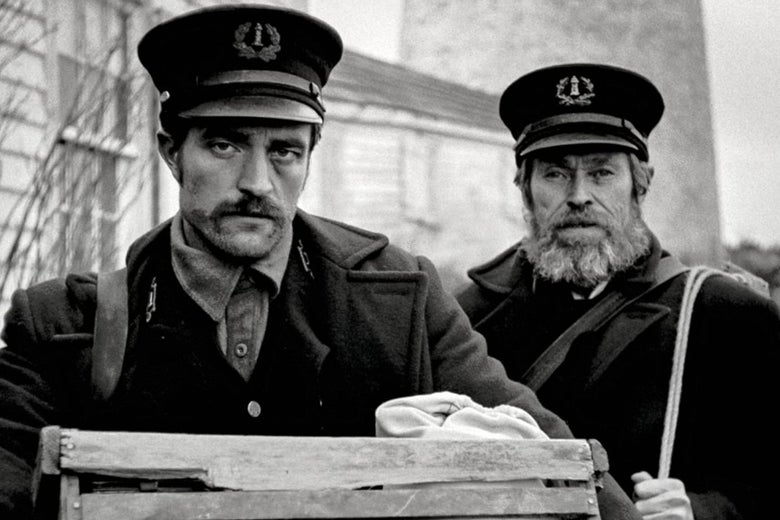 I dislike people. This movie reinforces that conviction. These two hard-headed men barely tolerate each other, and would rather uppercut each other’s faces than dare to enjoy a hug. In fact, the homoerotic subtext is mined heavily for ironic laughs, and even this movie proves it isn’t above a fart joke. But much of the humour, which goes hand in hand with madness, is darker than the urine in daily-hungover pair’s piss pots, and the jarring switches between night and day becomes unsettling as the tension mounts up. Compounding this is Jarin Blaschke’s stark cinematography of sea expanses and enormous waves battering black rocks, and the boxy aspect ratio increases the tale’s claustrophobia a la The Old Dark House. Sound, too, has its role, with every ugly machinery sound and seagull screech clanging and screaming as its own horrid soundtrack.

Dafoe and Pattinson are engulfed by their performances; while Dafoe has the showier role, he shines through sheer presence and his bug-eyed, non-blinking monologues. But Pattinson, since Good Time, has become electrifying to watch, all lingering traces of his YA beginnings quashed by the film’s first voyeuristic moments. The two butt heads like seasoned stage actors and embrace like old drunks, and both disappearing into their carefully curated regional accents (with Pattinson making me miss MA). It’s a fascinating joy to watch the two spar in what is basically a two-man show.

It wouldn’t be an Eggers film without haunting imagery, and it’s there in fits and starts of hideous, beautiful glory, amplified by the decision to shoot in black-and-white. It might be a frustrating watch for those used to linear storytelling, so trust in the trailer. But you’ll be rewarded by a sinister yarn of biblical purity and wickedness that’ll swim into your nightmares.