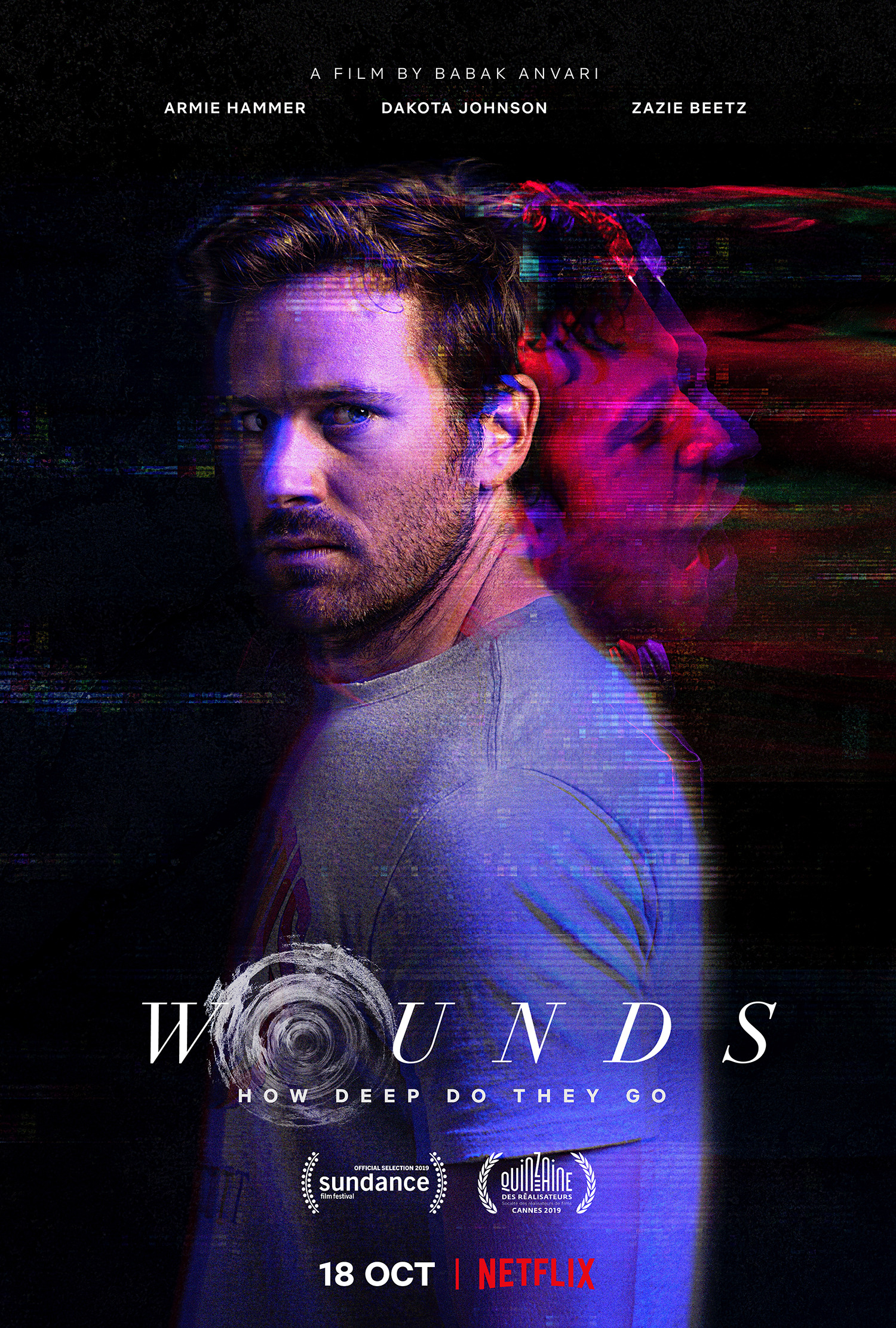 This is the second time I’m writing this entire post out – from memory –  because WordPress’s new ‘block editor’ is a piece of fucking garbage and deleted an entire post that was ready to hit ‘publish’. Thanks, WordPress. You are the 99% Napster download of blog editors.

It’s better to watch Netflix’s new offering Wounds as a drama with horror-thriller elements, rather than a straightforward genre offering. Otherwise, you’ll come away feeling cheated by an anti-climactic ending that would have worked great in a single-setting short horror film (which would have been fitting, considering this was based on a novella).

The story follows bartender/slacker Will (Armie Hammer), who discovers a mobile phone some underage kids left in his bar after witnessing a fight between locals (that Will had to break up). But he’s disturbed by its horrifying contents, which set in motion a chain of events that threaten to unravel his life.

That sounds fairly linear, but it isn’t. Directed by Babak Anvari, he of the better-received Under the Shadow, brings to horror a decidedly non-traditional way of storytelling, focussed more on mood and concept than anything particularly story-driven. I read this as an allegory of mental health, and the signs, exaggerated in typical cinematic-horror fashion, were there: increasingly poor choices, mood issues, physical changes, pushing loved ones away, and alienating yourself. So it was oddly triggering for me, and gave me some fucked-up nightmares that night that I still can’t shake.

But Anvari has stated that this is an examination of unchecked toxic masculinity, and the true horror is that men like Will exist, who would rather lash out or head down self-destructive paths than try to make efforts to better themselves – for their own sake and for that of those who care about them. That said, it’s no wonder that – much like Under the Shadow – the strongest performances are from the film’s women: Zazie Beetz is magnetic as Will’s forbidden crush, and Dakota Johnson imbues her suffering girlfriend role with nuanced pathos.

It’s a shame both the figurative and physical horrors of the film wasn’t explored in more detail, as their superficial musings end up as confetti of plot threads that don’t quite come together at the end. But, if read more as a drama-mystery, the film might give you the odd bad dream or two a few days after you’ve moved onto watching something else.