No, this isn’t the Chris Farley movie. This is a bizarre Kiwi black comedy about killer, er…sheep. And at this point, I’m sort of liveblogging it, at least up until the first inevitable sheep attack, because I knew this’d be a silly movie and I figured this would be a slightly less professional way of reviewing it.

So, right now: lovely countryside. Oooh, look at all the happy sheep! And the cute sheepdog that looks more like a fox-y Rottweiler doing his job and the cute little farm boy being all cute! And the father in a cowboy hat being all cute! And now this surly, floppy-haired teenager angrily staring at nothing in particular. Yeah, walk away to allow the opening titles to fade in, you cunt.

Oh, look, here’s a cute sheep randomly tied up. On, no, here comes the surly teenager with an axe, menacingly reciting a rather narcissistic bastardisation of “Mary Had A Little Lamb” and then…he…chops the lamb? He looked like he was enjoying it too much for it to be some sort of legitimate chore. You cunt.

Now the little boy (Henry) comes looking for the someone called Dudley, only to be shocked by a MURDEROUS-LOOKING, GROWLING SHEEP-HEADED MONSTER OMG WTF THIS POOR LITTLE CHILD oh wait it’s just the stupid surly sick teen pulling an even messier Ed Gein by wearing the fucking half-eviscerated lamb’s caracass to scare this little kid. Uh, great commitment to the bit? Well, it’s not fucking appreciated by Old Farm Lady who names the Kiwi Lamb Killer  as “Angus” and tells him to stop fucking about.

City Boy arrives at a country home at the end of a very expensive cab ride (431.70 NZD) and finds no-one home. But there IS a menacing-looking taxidermied half-ram on the wall. No other sheep imagery as of yet. The picture frame he’s holding up is off-white. Does that count? Old Lady holds a gun to him thinking he’s an intruder but then calls him “Henry” oh wait it’s the cute little kid from before! Yay! He’s all growed up despite having such a sick cunt for a brother. Maybe he’s out of the picture?

Oh, wait. No. He’s some sort of Important Man who’s doing some sort of outdoor press conference and he’s being a total dick about fucking over the family land and making the sheep homeless. And he still hates the sheep, as evidenced by the snide “baa” he gives his brother. The still-floppy-haired cunt.

Two hippies – a guy and a girl – annoying people in white lab coats. They’re “saving the country from genetically-engineered castration”.  Oh, and I love the accents. Haven’t heard a New Zealander talk on film for a very long time; they’re way better than us at doing accents. Hippie Man, who looks like Pirate Worzel Gummidge, runs from the scientists and gets separated from his Lady. He falls over, and then is attacked by some tiny, worm-like, snarling, baby sheep-looking thing that literally hangs off his face, dragging a massive part of his skin off and causing a hole that happens to face the camera as he screams.

The Grown-up Brothers are catching up. Floppy-Haired Cunt is doing well for himself, fucking over the family and all, profiting from their misery. Fucking cunt. Little Henry is not happy.  Back to Pirate Worzel Gummidge. Snarling, gross lamb-slug crawls away.  Back to the house. Old Lady disembowels a rabbit in that way that kindly old aunts do, and Henry catches up with Nice Brown-Haired Guy, who still has the same hair as his childhood counterpart from the first few seconds of the film.

The sheep flocks look cute and happy. But ugly fake worm slug lamb hellish pooh-slime does its Muppet-like crawl up a random tuft of hill. A kindly sheep approaches it, only to be snapped at. The kindly sheep is all, “fuck this shit” and fucks off. 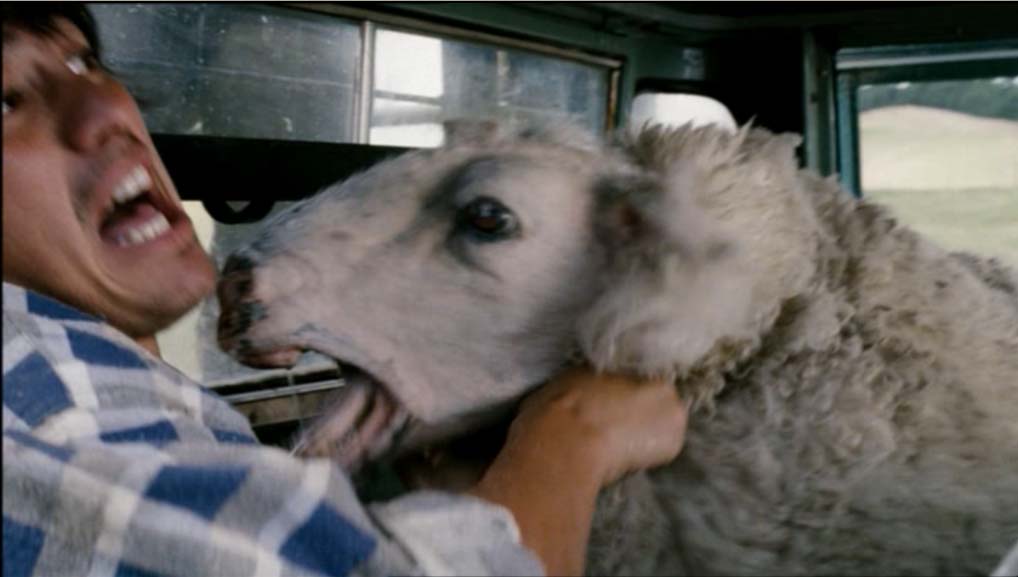 Henry and Nice Brown-Haired Guy happen across an injured sheep in the fields. Hippie Lady happens across them and holds them at gunpoint. Back to Pirate Worzel Gummidge, who grabs a passing rabbit, strokes it apologetically, and rips out its neck in the same way that gross angry ugly fake worm slug hellish pooh-slime did. Back to Hippie Lady, who is told by the boys that they don’t know where her friend is. She then insults their auras but stops to be lectured on how she’s totally incorrectly holding the gun, at which point she totally falls for their “here, give me the gun; let me show you how to hold it” trick and she’s disarmed. Twat.

In the home, the uncle is watching telly and gets up to walk off-screen. We then hear crunching and growls and screaming, so for all we know he could have caught his hand in the garbage disposal, but we’re guessing he was killed by a sheep.

Back to the fields, where Hippie Lady introduces herself as Experience, along with her noble, Earth-saving goals. The boys then decide to bring the gun-wielding Stranger with a Weird Name back to their own home, where they immediately suspect something is wrong. UH-OH ANGRY SHEEP ALERT. “Jesus mate it’s not going to bite,” says Nice Brown-Haired Man to Henry, who has had a lifelong fear of sheep about the fact that this is TOTALLY GONNA HAPPEN. Hippie Lady says this is a direct result of Angus’ fucking with genetic engineering. But no time to argue because a SHEEP BUSTS THROUGH THE DOOR OMG HEEEERES’S SHEEPY!

And from here on in the movie gets equal parts ridiculous, violent, comically violent, hilarious, warm and disgusting. The poster/synopsis implied it was more comedy than anything else, but while the movie does play a lot of the horror straight, the balance between the tones never feels uneven. Some of the most laugh-out-loud moments made me LOL in shame, such as when a victim feebly tries to throw his own chewed-off leg at one of the sheep. There are close-ups galore of gushing arm stumps, mouths being bitten off and two sheep angrily playing tug-of-war with one hapless victim’s intestines. Despite this, the sheep are so fluffy and cute-looking that even when they’re zombiefiedly nomming on innocent people’s bodies, all you do can do is look at them and go, “OMG THEY’RE SO FLUFFY AND CUDDLY-LOOKING!!”

There are moments of tenderness between Henry and the various protagonists he’d left behind as a child, including the stilted exchanges with his clearly always-distant brother. There are sweeping, majestic shots of gorgeously vast stretches of land. There’s also the most creative use of a fart.