Today in the break room at work (which is so small that just two occupants have to shimmy like awkward pensioners on a first date just to make some coffee),  a co-worker who had previously been nice to me noticed I was still sick. He said, pretty sternly, “you shouldn’t be here.” I laughed it off and agreed, noting that I worked from home last weekend. He then said he was going to write a complaint to my manager.

And if THAT wasn’t ridiculous enough, he informed another person squishing into the room, “Watch out, she’s sick” and pointed at me. He then inched out of the room against the wall, narrating that he was trying to keep as far away from me as possible. Once he left, I attempted to make small talk with my fellow room sardine, but nothing was going to disguise my leperous shivering and bright red Ebola nose. The damage had been done.

I thought the other guy had been joking, which was why I was laughing it off (Brits = used to deadpan humor), but then I realized that this is the Land of the Charlie Sheen Was Somehow on The World’s Shittiest Sitcom for 7 years, so I quickly got to be simultaneously ashamed, embarrassed, upset and angry. So this is why this entire post will be littered with pictures of cute sick animals. 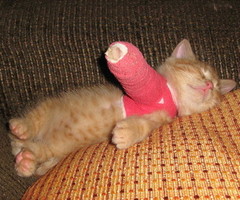 You see, being sick is considered a sign of being an undesirable, an untouchable. Whether it’s the an old adorable witch lady implying that my husband was of a weak mind to get a persistent cold (i.e. man flu), or toothless health insurance rejects in acid wash denim on the bus, sniffling, sneezing and coughing are an indication that you are simply just a lower quality human being.

In England, I had worked as a temp and had also had permanent (i.e. yearly contract retail) jobs. The only thing that really differentiated temp from perm is that you could be let go without any notice (and leave without giving notice), and the pay was weekly instead of monthly. Sick days and holidays (including bank holidays) were paid in full,  but for a temp job, if your second day is a bank holiday, you probably won’t get paid for it. Rule of thumb was that for every month you worked somewhere, you earned 1.5 days each of bank holiday and regular holiday.

The last time I called in sick, it was to do with a pretty bad  virus. I was off for about 3 weeks, but I received sick pay. I was still living with my parents, and I was able to trot off to see my GP who prescribed some antibiotics for £7.

Here? As a temp, you do not get paid for any time off. Yes, the office is closed next Thursday for that land-stealing-murdering celebration day, so I am not allowed to come into the office to work. So I don’t get paid. My agency even makes a point of stating in their literature “we do not compensate for bereavement time”. Wow. So of course they don’t pay for time off sick, referring to it as “time off”.

Everyone at work who insisted that I go home was a permanent employee. They had got their free flu jabs a few weeks earlier, and no-one appreciated the South Asian British monkey from Outbreak walking around infecting everyone the week before Thanksgiving. I didn’t want to admit that the difference between someone like them and someone like me is that if I go home to “recover” for a few days, those few days take a big fat chunk out of my pay packet and I wouldn’t be able to pay rent or buy food to starve a fever. And not only would I be out of pocket for the lost earnings, but I’d have to pay several hundred dollars for a two-minute doctor consultation, pointless blood tests and eventually, eventually, a $300-odd packet of the wrong type of antibiotic.

Meaning I’m basically out two weeks’ pay for being sick and staying home to “recover”.

So what other choice do I have? I have to turn up and face these looks of scorn from people who never have and never will be a temp. Healthcare here is a fucking privilege, apparently.

My manager and I were chatting about what it’s like in the UK. He was shocked that I didn’t have health insurance and considered it a huge gamble on my health. I did explain that I never had any health problems – not even allergies – and that, even now, in my 30s, I still don’t need to be on any kind of medication for anything.  I regaled him with legends of standardized 7-quid prescription charges, free doctor visits and the time my poor little brother had to undergo major surgery within days of diagnosis, all paid for by the NHS, by we the taxpayers.

I’m glad he understood that it’s just one of the major culture shocks for me, but I shouldn’t have to feel like a fucking leper every time I fill a bin to overflow with tissues. I lied to a few people and said “oh, it’s probably just allergies, they say you can get them at any time, especially when you emigrate”, but I doubt anyone was buying it. I looked like boiled shit.

It’s unfair that such a social divide exists based just on what is, in other countries, a basic human need and a basic human right. How can a labor department allow employment legislation that encourages sick people to come into work and spread their germs through an air-conditioned, air-recycled office, because they literally cannot AFFORD to be sick? The best I’ve heard is that you don’t have to worry about losing your job or falling behind on work, but, basically, if you got sick, it’s your OWN fault. Not a system that discourages people from looking after their health.

My agency, while very sympathetic, advised me that if I was worried about being off work for long periods of time, I could go on unemployment (something I never even did in the UK). I wanted to email back to let her know that, as an immigrant, I cannot be a public charge (i.e. go on welfare program) like that, much in the same way that I can’t just go on a low-cost state-funded health insurance program (as a colleague had suggested). So what the fuck are my options supposed to be?

I can hibernate under a blanket all I want, but it is not going to change the fact that I signed up for a much lower quality of life when I emigrated to America. I am so used to my own government looking after me that I’m now considering going to medical school when I win the lottery, just so that I can stay informed on and maintain my own health. Because if you’re an immigrant who can’t afford health insurance, not only are you going to be heavily fined by the government (it’s mandatory in MA to have health insurance), but you also can’t take advantage of the “low-cost” health insurance options. Bafflingly, there is no inbetween – either you can afford to pay $600 per month or you get welfare handouts. If you can’t do either, then you’re fucked.

This is why you read so many stories about ghetto bodegas selling antibiotics without prescriptions, so some random twat with a cold can waltz in thinking that Trimethroprim will make their nose stop running. And when they finally get a UTI or kidney infection, it’ll be a puzzling dilemma when those specifically-targeting antibiotics will be completely fucking useless. Add sites like Yahoo! Answers and Web MD, and everyone’s an qualified doctor.

So because I can’t afford to ask my doctor about [insert most recent drug advertised on TV], I get to be a living exhibit of how sick people are useless, draining anomalies and should just be left to die. Same goes for disabled people – if you are an amputee or have a functioning larynx in a customer service call center, or have ever, ever, ever had any history of depression (which is the same type of  workforce liability as paedophilia or serial killing), you had better jog on. And if you can’t because you’ve got no legs, then fuck you, you should probably just hurry up and die, because you’re so useless to society.

On my way to work this morning, I looked out of the window of my shuttle bus and saw a middle-aged woman in a wheelchair struggling to push herself up the steep pathway. She had to use her walking stick to give herself leverage and use her clearly painful legs to manoeuvre. No-one bothered helping her at all,and this was a shuttle bus stop that not only served my company’s shuttle, but one to a very big hospital. They just watched her. Fucking assholes.

It’s a difficult decision for me to stay home tomorrow, but I’m really only doing it out of shame and embarrassment doled out by the permanent employees whose cringed faces I have to see every time I come near them. I will never get over this culture shock of being forced to have complete disregard for my own health like this. When you’re sick, you really and truly are alone over here. No-one has any clue what they’re talking about and there are absolutely no resources available to help you. Luckily to get myself well soon, I have lots of English tea, Pot Noodles, Toffee Crisps and a picture of some cute cats:

Failing that, I could just wait until I get home for Christmas and just go see my GP, from whom I have every right to receive free care. And I didn’t even have to be the British-born British citizen I am to benefit from it.

2 thoughts on “People Are Strange, When You’re Sick”