Not that kind of boss. Like a BOSS (and not my actual boss).

This week, the entire floor of my work moved into a new office. Tons of detailed emails from the company’s national real estate division containing instructions/reminders/move numbers/schedules, an offer to tour the new building, breakfast receptions before and after the move, and boxes upon boxes upon boxes – three different moving companies (and you had dare not use the wrong box for your shit).

We were moving down the street. You could actually see the new office from the wondrous, skyscraper views (not top floor, but high enough that balconies would be a health and safety issue).

Because I am the Office Cinderella, I was tasked with packing and unpacking/filing our team’s office supplies, helping others pack, and still trying to do my own projects and meet my own deadlines, along with a slew of new responsibilities I’d now been assigned as a result of having a new manager (in a completely different office).

Unsurprisingly, it was rather all-go around there, and around here when we moved. It’s only our second week in the office and things have been manic. Everything from making sure your things got moved over to the right place, to mapping printers and figuring out where the hell you’re even supposed to be…

Somehow, I found that I coped and stayed ahead of absolutely everything that was thrown at me. I didn’t miss a beat, and I have to say that I attribute that to a lifetime of hogging that giant old Hitachi dinosaur and playing video games ever since I was a small, gap-toothed, frizzy-haired baby-nerd:

Parodied in everything from Family Guy to The Simpsons, that’s a sign that it’s the easiest guess of the bunch, and why even little old ladies at the Waitrose checkout understand my feeble attempts at humour when I describe that packing the bags (something you actually don’t do here in America) is a real-live proper Tetris workout.

Everything we were packing into boxes at work was square-shaped: files, folders, old corporate gifts, leaflets, shelving units, signage and presentation packs. All blocks, slabs or tubes, it was Corporate Tetris. People didn’t believe me at first when I said I could slot things in just the right places (shut up) while still giving enough space for the lids to close. At the other office, we had been granted about one-third of the filing space we originally had, and so I had to do it all over again- Corporate Tetris up to Level 19 and slot 6 drawers’ worth of unsorted archives into 2 drawers that had already been half-filled. My gaming had paid off – it was a success. Tetris had been one of my most-played games when I was growing up.

Another favourite was Donkey Kong. But luckily I didn’t take my box-lifting cues from him. Total Health & Safety issue. 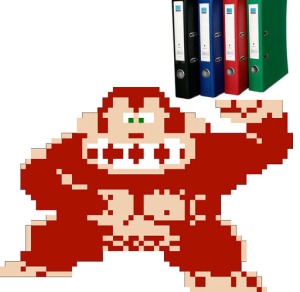 We moved from a relatively small skyscraper to a massively oversized center that hosts exhibitions and state visits almost every day of the year. This meant that, instead of popping around the corner of your cubicle area to grab a coffee or nip to the loo, it’s a ten-minute walk to the toilets that auto-splash whenever they feel like it, and a ten-minute wait after a ten-minute walk to the cafeteria, where you compete with several other punters to get the one chef’s attention for a $1 slice of French toast that was cooked on the same laptop-sized grill as the bacon and the other bacon. In short, it’s chaos.

Movers were unloading trolleys of boxes left, right and center around me, leaving these empty wheeled death-traps all over the place. Visibility was often low depending on the time of day and the impending automatic time-outs of the lights. Being around a larger group of people on a larger floor, some people were amped up and ready to start throwing tons of work at you, and the rest would plod along at a slow pace and then get a Star or Bullet to propel them into somehow finding tons of projects for you to do on a Friday afternoon.

Moar chaos, and moar opportunities to put my MarioKart-honed skills to the test. Dodge errant moving carts and fellow disoriented coworkers like banana peels, load up on free food leftover from meetings for a triple-mushroom boost in the middle of the day, speed up on rainbow ramps through useless corporate buzz words like “paradigm” (eat a cookie) and throw a fucking blue shell up the arse of anyone too smugly far ahead of themselves to be cut down to size. A feat worthy of the 150 cc mirror levels. Thankfully no snakers (fuck you, snakers).

How could this go wrong? Successfully playing video games requires good hand-to-eye co-ordination, and when it comes to time-management games like Diner Dash, Wedding Dash, Cake Mania, and basically every single non-Hidden Object game on BigFish/Wild Tangent (which is most of them), you’ve already built quite a skill when it comes to being able to assess priorities and act on each one accordingly and quickly.

It’s not mindless clicking, like a lot of data entry jobs/processing/call center work, which is basically glorified factory work in a pseudo-office setting. Each day is different for me – a new project, a new priority – sometimes ten new priorities, some of them to be done “asap” and some to be done in 5 minutes.

Everything going crazy, stuff being thrown at me all at once – bam bam bam – enough to make a sane person go crazy. Luckily I’m not sane. Years of ferrying around cake and wedding gifts and sushi to angry, impatient, bastard guests/customers has prepared me for having the patience, diligence, accuracy and efficiency to excel in such a high-pressure environment. Staying on top of each project and task while acknowledging the rapidly-changing deadlines was a testament to the many hours spent battling various platforms of the Dash games. Even that shitty Parking Dash one.

Even before I could sit down at my new desk for the first time, I had to dodge other people who had never been in this cubicle labyrinth before. No-one had any sense of direction and a collision was likely, whether it was into a window, a wall, a cubicle wall, or just other people. The cubicle walls are much higher than the slightly more sociable-heighted ones of our old place, and as a result you’ve got a bunch of people working in a massive basement, at computers, like something out of The Corporate Shining.

I’ve always found maze games boring, repetitive, stressful, confusing and embarrassing – especially when you get it wrong. So continuously getting lost in the basement area of our new building, when there were a ton of people walking around who somehow already knew all the secret passageways and how to get everywhere from everywhere, was disquietingly humiliating. Rueing all the lost days I could have spent playing games like this, I missed out on the valuable skills I could have attained to cope with navigating this Death Star patio mazes in a Matrix-style Borg Cube. But all I was trying to do was find the bathrooms, which never seems to happen in any video game, anyway.

From here on in, all I have to do is keep levelling up by using the best strategies, skills and (office-based) tools, which is where my nascent interest in puzzle games and RPGs is finally kicking in. Impatient with the grinding that earlier versions of WoW offered up, and not even being able to find the damn town in Professor Layton (the precursor to the actual START of the game itself),  I finally got into a few of the LEGO DS titles and haven’t looked back. Platform games help with putting some of the monotony into perspective, and just prepares for the excitement of big meetings, big projects and big opportunities to advance/level up.

Although I have to remember NOT to kill my boss. He may be my boss, but he’s not *A* boss.