Today goes by a lot of names -Armistice Day, Remembrance Day, Poppy Day – but here in the U.S., it’s known as Veteran’s Day. Honouring the day here is a lot different to what I’m used to, but I didn’t get to experience it fully because I worked from home today. Here, banks are closed and maybe a special is run on the news or TV, but that’s pretty much it. The UK observes a two-minute silence at 11am, and I rescheduled a virtual meeting so I could observe it myself – I may have been working from home, more or less in silence, but click-clacking on a keyboard and talking about configuring an FTP client installation didn’t really feel terribly respectful and would be missing the point.

I’ve worked in shops and offices where everyone observes it – not obediently, but as a matter of solidarity in tribute and tradition. The meaning behind it is that every fallen soldier is remembered, and being idealistically pacifist, I can still show my own respect because it is not supposed to be about me or about any political agenda.

These guys are a pretty common sight in October and early November, but there’s nothing of the sort here. No-one pins a poppy to their lapel, which is ironic considering that in 1918, American YMCA employee Moina Michael actually conceived of the idea of wearing a poppy to show her respect in the first place, after being inspired by the poem In Flanders Fields (see the top of this post). In just a few short years, she had spread the practice to Canada, the UK, Australia and most of Europe. According to Wikipedia (I know…), it is a practice for Memorial Day, but I have never seen it. How did something like that die out over here?

George Bush (the older one that harassed Homer Simpson, not the monkey man) banned any media coverage of the repatriation of fallen soldiers, something that was only overturned by Obama in 2009. Like they’re ashamed to admit these kinds of losses other than the lackadaisical pre-advert video blurbs on CNN?

In the UK, the repatriation of fallen soldiers is a public event, albeit a respectful one. The bodies would be repatriated to RAF Lyneham and would pass through a tiny market town called Wootton Bassett – now Royal Wootton Bassett (although it will now be through Brize Norton). The crowds watching the hearses would grow bigger with each funeral procession, and while I have never attended one, I would always see from the media coverage that it was a sombre affair, with the feeling of a national patriotic event without the nastiness (like a well-behaved international football tournament win).

My attention was recently brought to a story saying that the U.S. military were dumping ashes and body parts of fallen U.S. soldiers into a landfill in Virginia. The article does state that they are parts and not complete bodies, but it’s still so appalling and disrespectful, and brings to mind other people who did pretty much the same thing. And no, you can’t cite Godwin’s Law for that. Sorry.

Someone suggested to me that perhaps the U.S. just didn’t want people knowing exactly how many bodies were coming back, which is in such stark contrast to the repatriation tradition I grew up knowing about. A few Hallowe’ens ago I saw a couple of Army recruiting officers with a van talking to tons of small kids, luring them with a van that had a big TV and an Xbox where they could play Call of Duty. I found that pretty distasteful. They were like bankers or salesmen – lure you in with false promises and flashy demos/literature and then just completely screw you over when you’re in any kind of trouble. 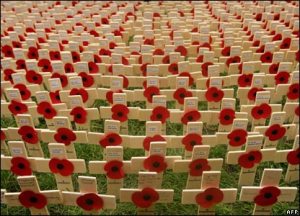 So I didn’t wear a poppy this year, but I observed the two-minute silence. I didn’t know what to think about, but that first minute went pretty quick, thinking about why people become soldiers in the first place, why we go to war, what the fine line is when you’re signing up for a job where you know you might have to kill people for a living, but you can’t be a bad person. For some people, it can be a rite-of-passage. I didn’t know that the lead singer of Tool/A Perfect Circle served in the 80s, along with a few other surprise names. 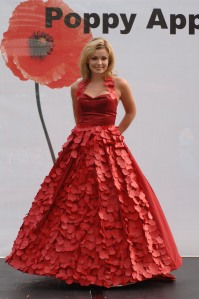 My own father worked as a doctor in the army in South Asia, and so did his late elder brother, a highly-respected General whom my Dad always looked up to and always spoke of fondly. One of my cousins served in the British Navy before finishing law school and even met the Queen herself. It’s likely you’ll know at least one person who’s served in the armed forces. For many of my friends who enlisted or tried to, they said it was a great opportunity to see the world. I don’t personally know any fallen soldiers, but I still felt a bit angry at FIFA’s decision banning football players from wearing poppies, owing to it being a “political statement”. This is just not true. A fallen soldier is a fallen soldier, who may have had completely different political ideals and religious beliefs from his fellow fallen comrade. It has nothing to do with politics and everything to do with showing respect for the dead.

After so much humourless negativity and bleak subject matter in this post. I think we need a picture of a cupcake: