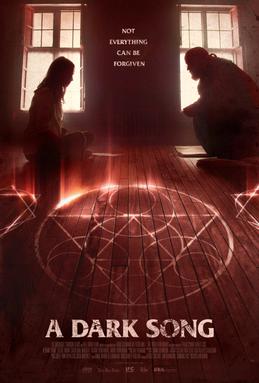 Filmed with Irish money but on Welsh soil and using just two English actors, A Dark Song is a truly British film indeed. The debut of writer/director Liam Gavin, the film works best if you approach it as a drama, in spite of how you might feel following the closing moments.

It’s out of character for me, but unavoidable spoilers after the jump.

Our story is thus: Sophia (Catherine Walker) has rented a very large house in a remote part of the Welsh countryside, to which she has also brought Joseph (Steve Oram), an occultist. She is paying him to conduct a ritual in order to summon her guardian angel, who she will ask to let see her deceased son one last time. It turns out to be an arduous process: months of sitting still in chalked-out circles for days, no food, no sleep, drowned in water, and at the behest of Joseph’s dangerously short temper and appalling manipulation (for which he later apologises). He is a despicable, irredeemable asshole, and Oram plays him with the knowledgeable arrogance that I’ve seen in every other occultist in my life. Meanwhile, Walker is left with the muted role of a soul-hardened young mother in mourning, but imbues it with little presence. In many scenes, she is almost invisible, even when she is on screen.

Two-thirds of the film slow-burn through off-camera sounds and banging doors, bad dreams and strange whispers. This, coupled with the constant friction between the main two, maintains a decent simmer of non-stop tension…

…Until it comes crashing down in the third act. I can’t speak for the accuracy of the ritual as depicted on screen, but it was incredibly detailed and looked like a lot of work. When things do start to happen, it’s a sharp turn into a completely different movie: bleakly lit lost-soul extras drag Sophia across the house, torment her and cut off her finger. But, through the power of some uttered words, she frees herself to meet her guardian angel – who is rendered in such distractingly sub-par CGI that the unintentional humour of it destroys the understated atmosphere that’s been built up. It’s a betrayal of the ambiguity of the quiet, intimate human drama that was unfolding up to this point, and answers that the audience isn’t really looking for are just thrust in one’s face.

On balance, I still enjoyed it; the subject matter may be heavy for many, and the first two acts make for some very uncomfortable viewing. Not quite haunting, but you may feel just a little bit drained afterwards.