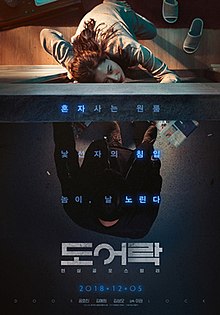 By far, this is the scariest thing I’ve seen so far this month, and arguably one of the most frightening films I’ve ever watched. Few films (e.g. Hereditary) have been able to climb under my skin and stay there, freaking me out, days after I’ve watched it. To me, that’s the pinnacle of horror – especially to a desensitised horror nerd.

Door Lock takes its inspiration from the Spanish film Sleep Tight. But to call it a remake might denigrate this South Korean offering, as it takes the original story – a man creeping into women’s rooms at night and pretending to live with them – and flips it to the POV of a victim.

The opening scene is an innocuous sequence that has a truly chilling after-effect when it hits: In a bedroom in a flat in Seoul, a man is spooning in bed with a woman. He gets up, showers, tucks the blanket over the woman, and leaves. Some men’s clothing is draped over an air-dryer.

But later, the woman goes to work, and something comes up in conversation: She lives alone. The clothing she puts there to give the impression that she has a protective male in-house presence. In fact, she does everything right at any given moment of the movie: she calls the police, until she is discouraged from doing so. She calls building maintenance to fix her lock. She moves apartments. She installs a security camera. She is polite to a customer who keeps aggressively hitting on her, because all women know that to rebuke a man, even gently, can be fatal. She is grateful when her male manager intervene on her behalf. She smiles even when she doesn’t want to. She is good at her job. When in a dangerous situation, she grabs a weapon – a blade of grass that she clutches so tightly that her fingers bleed. Her female survival instincts are honed to be razor-sharp.

And it’s still not enough.

The police don’t believe her. She’s suspected of having relations with her boss. She’s suspected of being drunk. Her stalker is steps ahead at every turn. The average male stranger on the street is a potential threat. No matter what she tries, even while trying to stay calm in the face of isolation and increasingly external conflicts, she is thwarted in her efforts. Luck, skill and experience are on the stalker’s side, and he knows it.

It’s a terrifying example of women have to face every day. Friends ask me to make sure I let them know I got home safe. But I might be walking outside with a male friend and a group of men aggressively grab my ass as they walk past. And they’re bigger than us, and they outnumber us, and there’s nothing I can do except cry in the pub, thinking how I was dressed (a loose t-shirt dress with no cleavage – not that that truly matters to sexual assaulters), while my friend wishes he’d stood up to them. Every woman you know (and, I’m sure, many men) has at least a handful of these stories. Some, including me, starting from before we started turning into teenagers.

But this film doesn’t just rest on these commentaries. The thriller sequences themselves are tightly shot, photographed through foreboding angles and eerie light. Performances are at turns devastating and horrifying. The level of violence is slasher-level, all the more sickening because it’s both clinical and brutal. Overall, it’ll creep you out whether you’re male or female, but the extra layer that is all-too-relatable for many women is the insidious icing on top of the unsettling cake.